Stop the Bleed is the Georgia Trauma Commission's statewide initiative to prepare community members to save lives in a bleeding emergency.

Region 9 Trauma Committee members train, equip and empower bystanders to help "Stop the Bleed" in victims in the vital moments before professional help arrives. Just minutes can be the difference between life and death. Dr. William Bromberg, a Trauma Surgeon at Memorial University Medical Center, states "You don't need to be a doctor or an EMT to stop the bleeding. If you see blood coming out of something, stop it and get them to the hospital. It sounds trivial, but until you learn, it doesn't happen."

Today we live in a world where terrorism, the actions of unstable people, and the dangerous impulses of friends and relatives are very real and becoming increasingly more frequent.

Massive bleeding from any cause, but particularly from an active shooter or explosive event where a response is delayed, can result in death. Similar to how the general public learns and performs CPR, the public must learn proper bleeding control techniques, including how to use their hands, dressings, and tourniquets. Victims can quickly die from uncontrolled bleeding, within 5 to 10 minutes.

However, anyone at the scene can act as immediate responder and save lives if they know what to do. BleedingControl.org supports former President Barack Obama's policy directive for national preparedness (Presidential Policy Directive 8), which targets preparedness as a shared responsibility of the government, the private and nonprofit sectors, and individual citizens.

Stop the Bleed is designed to provide life-saving education to community partners such as educators, church leaders, law enforcement and more. These educational sessions demonstrate how to use bleeding control kits found in Georgia's classrooms, law enforcement vehicles, and public venues such as airports, stadiums and churches.

In April 2013, just a few months after the active shooter disaster on December 14, 2012, at Sandy Hook Elementary School in Newtown, CT, the American College of Surgeons (ACS) convened the Joint Committee to Create a National Policy to Enhance Survivability from Intentional Mass Casualty and Active Shooter Events. This was in collboration with the medical community and representatives from the federal government, the National Security Council, the U.S. military, the Federal Bureau of Investigation, and governmental and nongovernmental organizations, among others. The committee's recommendations are called the Hartford Consensus.

Click Here for more information on the Hartford Consensus.

Compressing the Zones of Care

The Hartford Consensus recommends that an integrated active shooter response should include the critical actions contained in the acronym THREAT:

A key component of the Hartford Consensus is this:

In the immediate aftermath of a mass casualty event, some lives may be lost through caution. The standard approach has been to cordon off the zone of casualties, a wide "hot zone," until it's been ensured that all threats are suppressed. The Hartford Consensus suggested that the plan be modified to allow earlier access to victims outside the real hot zone, the location of the active shooter, or a possible bomb. Thus, agreement on new systems of integration and coordination between law enforcement and other teams of responders is needed to ensure the mutual understanding and sequencing of roles.

By compressing the "hot zone" with the two other zones of care, the "warm zone" and the "cold zone," less time is lost and more time is made available to begin bleeding control techniques so that more lives are saved (see diagram below). 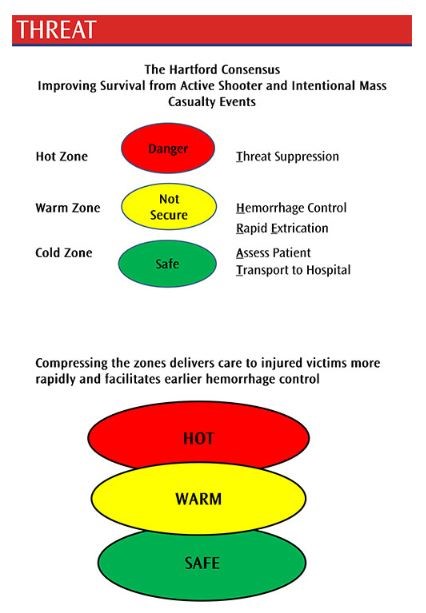